​​Celeena is from Holdrege, Nebraska where she grew up on a family farm.  Growing up she always loved the animals on the farm.  She was always pushing her cats in the baby stroller or checking cows with her father.  Celeena attended Colby Community College and got her associates degree.  She started to work at Swartz Veterinary Hospital in 2019.  She has a beautiful, playful dog named Jorgia and a spit fire cat named Boone.  Fur babies have always been a part of her life, so she loves to care for everyone's fur babies as if they were her own.

Doris was born and raised in Northwest Kansas near Brewster. She graduated from Brewster High School in 1983. Doris married Jerry Helin in 1985. They have 2 sons, Jared and Rusty and a dog named Rudy! Jared lives in Manhattan, KS and is the Ladies Assistant Golf Coach at Kansas State University. Rusty lives in Clearwater, KS and is now a District Sales Coordinator for Aflack. Doris worked for the Colby School District as a paraprofessional for several years before taking a job as a medical receptionist for 7 years at Colby Medical & Surgical Center. She started as the receptionist at Swartz Veterinary Hospital in September 2005 and is now the Office Manager. Doris loves spending time with family and friends, camping, fishing and just enjoying the great outdoors.

Tammy Swartz, DVM is a native of northwest Kansas . She was born and raised on a small family farm near Russell Springs . She is a 1992 graduate of Tri-plains High School and a 1993 graduate of Colby Community College . Dr. Tammy Swartz graduated from Kansas State University School of Veterinary Medicine in 1999. Dr. Swartz and her husband, Cory, have two bright and vivacious daughters, April and Brittany. Dr. Swartz is proud to once again be a part of the Colby Community. The community has greeted her with such open arms. She welcomes everyone to come in and meet her and her staff.

Teresa was born and raised in Sublette, KS then moved to Colby in 1995.  She has an Associate degree in Business.  Teresa married Chris Atwood in 1997 and after 20 years they have accumulated 4 dogs and 1 cat and reside in Goodland, KS. She started working at Swartz Veterinary Hospital in September of 2015.  Outside of her dedication to her job and love for animals Teresa enjoys spending her free time with her husband and pets.

Autumn grew up in Wynona, KS and attended Colby Community College in the PTA program. She started working at Swartz Veterinary Hospital in January of 2019. She enjoys playing with her nieces, playing card games and cuddling with her dog Scout.

Allie grew up in Paola, KS and moved to Brewster in 2019. She graduated from Colby Community College from the Veterinary Nursing program. She has 0 kids but plenty of pets. She owns a bearded dragon named Ruby, two rats named Basil and Coriander, two cats named Dexter and Rigby, a beagle named Cash, and a border collie named Waylon. She has always loved all sorts of ani​mals from a young age. Allie loves to spend time with her pets, family, and friends.

Mindy grew up in Weskan, KS.  She now lives on a ranch on the Smokey River near Winona, KS with her husband Kris and her 3 children Dally, Shea, and Kolt.  She enjoys watching her kids grow up on the ranch with horses, cattle, and lots of wildlife.  They enjoy the company of their dogs Pete, Tig, Duece, and the barn cats.

Shelby graduated from Kansas State University College of Veterinary Medicine in 1998.  She chose a career in veterinary medicine because of her love of animals.  She lives on a farm south of Levant with her  husband Travis, daughter Kelly,  sons Gus and Jake, dogs Jack and Casey and many other beautiful creatures. 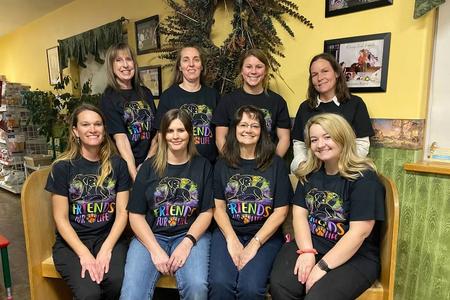 Carol grew up in Garden City, KS and moved to Colby in 2001.

She has two daughters, Kala and Kylee. Kala and her husband live in Aurora, CO  She is a Registered Nurse at the Medical Center of Aurora and Kylee now lives in Manhattan, KS and works for GTM as a Graphic Designer.  Lucy, is Carol's gorgeous black, Great Dane who is the joy of her life.   Before joining Swartz Veterinary Hospital in December 2014, Carol worked at the Colby High School as a paraprofessional.  She is very much a people person and loves animals.  Carol enjoys spending time with family and friends, especially visiting her three year old granddaughter Madison and newborn grandson Colt.